Open your Bible to Luke 2:1–7 and read these verses aloud.

“Then she gave birth to her firstborn son, and she wrapped him tightly in cloth and laid him in a manger, because there was no guest room available for them.” – Luke 2:7

Praise God for sending the gift of love through Jesus to us. Acknowledge that He knows every detail of the story for His people, even the small town where the Savior would be born. Thank Him for this Advent season to reflect and rejoice that love has come to us. 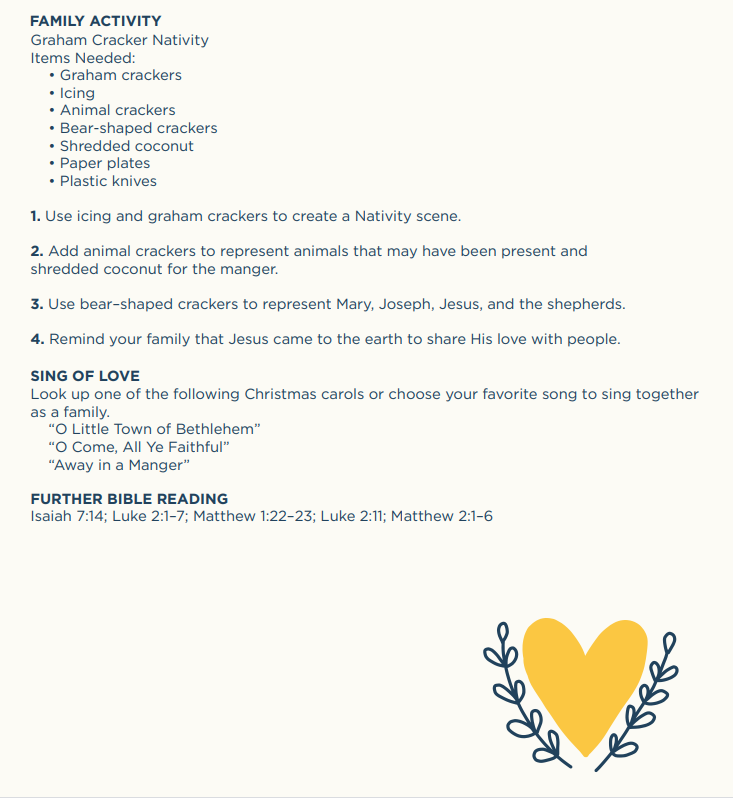 Bethlehem was a small town, but God planned for it to be a very important place in the story of how He showed His love for people. After about 400 years of silence (between the Book of Malachi and the New Testament), Bethlehem was the place God chose to take the next step in showing His unfailing love to people.

It was in Bethlehem that Mary and Joseph, Jesus’ earthly parents, welcomed Jesus into the world. They had traveled to Bethlehem because the law said that Joseph had to go to his hometown to be counted in a census. God had promised many years before to show His love through a certain family from Bethlehem. Joseph was from the family of King David. (See Matthew 1:6–16.) God also had promised that the Savior would be born of a virgin, so it was important that Mary and Joseph were not married when Mary became pregnant.

The town where Jesus was born, His mother, and His earthly father are all important parts of the story of Jesus’ birth. Each part of the story of Jesus’ birth was an example of God’s love to the world. First John 4:9 says that “God’s love was revealed among us in this way: God sent his one and only Son into the world so that we might live through him.” God sent the gift of Jesus into the world to the town of Bethlehem to demonstrate His deep and everlasting love for us.