Open your Bible to Luke 1:26-38 and read these verses aloud.

“Then the angel told her, “Do not be afraid, Mary, for you have found favor with God. Now listen: You will conceive and give birth to a son, and you will name him Jesus. He will be great and will be called the Son of the Most High, and the Lord God will give him the throne of his father David. He will reign over the house of Jacob forever, and his kingdom will have no end.”  – Luke 1:30-33

Thank God for the gift of peace. Praise Him for sending Jesus so that we can have peace with God when we trust in Him. Ask God to use your family to point others to the peace of God this Advent season. 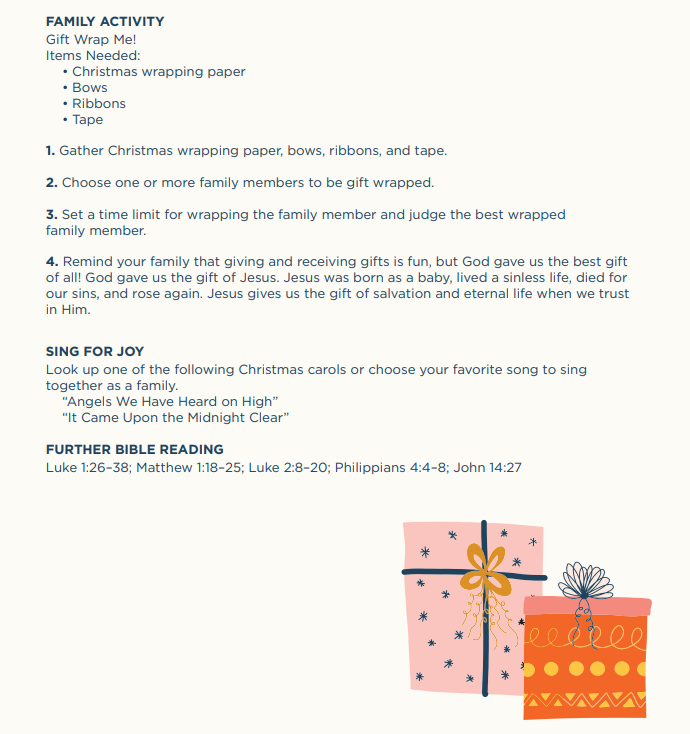 Throughout both the Old and New Testaments, angels were God’s special messengers. In the Christmas story, angels played a very special role in announcing the birth of Jesus. When the angel appeared to Mary to tell her she would be Jesus’ earthly mother, he told her not to be afraid. He brought a message of peace to Mary. He wanted her to know she was called by God to be the mother of Jesus.

Last week, we read about the host of angels who appeared in the sky and glorified God, saying “Glory to God in the highest heaven, and peace on earth to people he favors!” (Luke 2:14).

Jesus came to bring us the gift of peace. Because of our sin, the Bible says we are separated from God (Romans 3:23). God sent Jesus to provide the way for us to receive God’s love and be at peace with Him (Romans 5:1). The Bible says that it was God’s love that brought Jesus into the world as a baby. Just like the angels, it is important that we worship Jesus and tell others about His birth and the peace He offers.